Login / Register
Blog > How fonts can mess with your mind

How fonts can mess with your mind 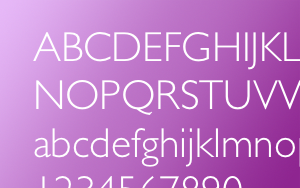 Very interesting article at New Scientist (unfortunately accessible only to subscribers), about how fonts affect the way we digest information and can even sway our opinions.

It's well known that how a font is designed can greatly affect its readability, and studies demonstrated that even minor differences could slow a reader down. You'd probably think that the easiest something is to read, the easiest it is also to remember, don't you? Well, that's where it gets interesting. Because according to this study, it's just the opposite.

When reading is easy, we skip the individual letters and instead turn the task over to the section of the brain devoted to pattern recognition. But when we trip over a word, it forces the brain to engage a different processing area: the dorsal parietal cortex, where the letter-by-letter reading mechanism is based, says Dehaene. This area has also been linked with attention and memory.

So if it's harder to read, it's easier to remember. Good to know! I might change the font on this site to Brush Script, or something.

That's not all there is to it, though. Another study found that a font that is more difficult to read may also subtly influence your perception of your own abilities: when a group of peoples were asked to read a recipe printed in a font that resembles cursive handwriting, they felt that preparing the dish would take longer and require a higher level of skill than when it was printed in Arial.

And hard-to-read fonts can also affect our views in other ways:

We are often prone to interpreting information based on our existing world view rather than by weighing up the evidence in front of us - an effect called confirmation bias. To explore whether fonts could influence this effect, psychologist Jesse Lee Preston of the University of Illinois at Urbana-Champaign asked a group of self-identified liberals and conservatives to read an identical argument in favour of capital punishment. Those who digested it in an easy font were more likely to report a view that reflected their instinctive political leaning than the group given the text in a difficult typeface, who described the argument as complicated and subtle.

So there you are, then: if you want your readers to remember your words, use a font that's hard to read; but not too hard, otherwise they'll think your ideas are tortuous and they'll tend to disagree with you.

I think I'll stick to Helvetica Neue for now.

Below are existing comments.