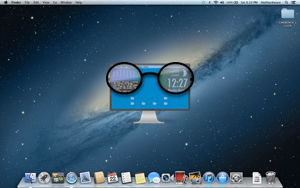 Geektool 3 is still in development and is not feature complete yet at the time of writing, and some things you could do with GeekTool 2 (like switching between groups from a menu) aren't implemented in 3 yet. But GeekTool 3 is now scriptable, which allows to do things from the outside that you cannot do yet with GeekTool 3 alone, like displaying/hiding a given geeklet. 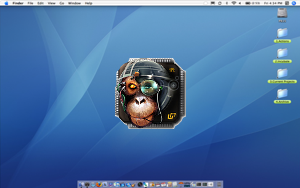 Now that Unsanity has released the first beta of their Leopard-compatible version of Application Enhancer, I could at last put together the first Leopard-compatible version of my DesktopSweeper (an APE Module that allows to hide—and show again—the Finder's Desktop icons). The first beta of it has been released privately a couple of days ago to testers, and I'm happy to report that so far everything has been working perfectly. So I'm now releasing the same beta to the public.

Continue reading for the details.

If you've been waiting impatiently (as I have) for a Leopard-compatible version of Unsanity's Application Enhancer, then you can rejoice: the wait is over!

A couple of days ago, Unsanity has released the first public beta of Application Enhancer 2.5, along with a beta of most of their Haxies (FontCard, MenuMaster, Silk, FruitMenu, and WindowShadeX). These all are accessible from this article.

Congrats, Unsanity, and thank you!

Happy Birthday Seasonality, and congrats to Mike and Gaucho Software!

Cocoatech just released Path Finder 4.6. There are lots of great tab-related new features in this version! And lots of bug fixes, too. Check out the changes log!

Congrats to Steve, Neil and Sasha!

The iPod Killer Is Stillborn

What a surprise! Apparently the so-called iPod Killer will never kill anything (except maybe some of its users?). Here are some quotes from The Chicago Sun-Times' review:

"Avoid," is my general message. The Zune is a square wheel, a product that's so absurd and so obviously immune to success that it evokes something akin to a sense of pity.

The overall experience is about as pleasant as having an airbag deploy in your face.

The setup process stands among the very worst experiences I've ever had with digital music players. The installer app failed, and an hour into the ordeal, I found myself asking my office goldfish, "Has it really come to this? Am I really about to manually create and install a .dll file?"

The Zune is a complete, humiliating failure.

Read the article for more about incompatibilities, DRM, pricing scheme, etc. Looks like it's the best present you can offer to someone you hate. :)

Unsanity releases final versions of WindowShade X 4.1, FruitMenu 3.6.2 and Application Enhancer 2.0.2. All of these are Universal Binaries and free upgrades. Congratulations, guys!

Got my Mac Pro 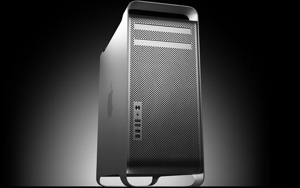 I received my Mac Pro yesterday, thanks to the company I work for, and I have to say that I love it! It's super fast, of course (takes only 30 seconds or so to boot and applications launch instantly), but I think what I like the most is how incredibly quiet it is. Basically, my external FW drives are noisier than the Mac, now. The difference with the QuickSilver it replaces is just amazing. Like night and day.

Continue reading for the details.

The greatest one IMO is the Code Folding feature that allows to collapse whole blocks of code like in outlines. I've dreamed of using outlines in Xcode for long (blame Frontier for that), and BBEdit is the first solution that comes close to it. I've been using it for some time and I love it.

There are many other great new features and this version is definitely a must for every BBEdit user (time to upgrade your license, Nico! ;) ).

Congrats to everybody involved in that release (that includes Seth)!